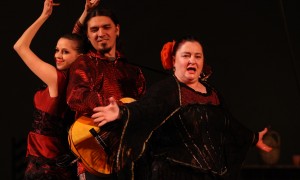 Ivelina Balcheva participated in the following music events: the 2010 Otkrovenie concert of romances by composer maestro Nayden Andreev; the 2010/2011 Zorro musical at the National Music Theatre in Sofia, starring as Shiran and presenting flamenco singing; the Storm theatre performance by Ostrovski starring as Destiny – this performance was played three times at the Russian Cultural Center in Sofia in 2013.

“The beginning is set by an acapella flamenco duet. The guest singer Ivelina Balcheva is extremely convincing as Shiran. She sings her purely vocal part with great passion, and her voice reveals a blend that is very strong, dense, and slightly husky – absolutely appropriate for flamenco.” Kultura (Culture) Newspaper, edition 3/27, January 2012

Balcheva is a typical theater character; she is great in dramas and comedies, as well as in musicals. She successfully acts typical characters at the age of 42-45, as well as characters of older age.

Despite her theater roles, Ivelina Balcheva remains significantly more known for her singing that mixes pop music with folklore, world music and jazz.

×
Update Required To play the media you will need to either update your browser to a recent version or update your Flash plugin.
Tweet